Sticking points in strength training exercises (lifts) are often referred to as ‘weak links.’ We are told that in order to overcome the sticking point in a lift, we must fix our weak link.  This is a misnomer and mixup: in other words, this false instruction derives from a mix of misnaming and confusion. In this case, however, rather than sticking points and weak links being confused themselves, it is their RELATIONSHIP that is confused.

This confusion leads to an analysis of lifts based on muscular contributions at certain portions of the exercise: an approach that sometimes has merits but creates false assumptions about what sticking points are versus what biomechanical weak links are.

What is a Sticking Point?

A sticking point, first of all, is not a point. It is the region of a lift that is basically the most difficult or strenuous, and where one is most likely to fail on a chronic basis. This difficult place in the lift is created by the inherent strength curve of the lift and not a muscle group supposed to be working at that time in the lift. So the sticking point for any given lift never changes. It is inherent for that lift and is created by the lack of mechanical advantage at that point. 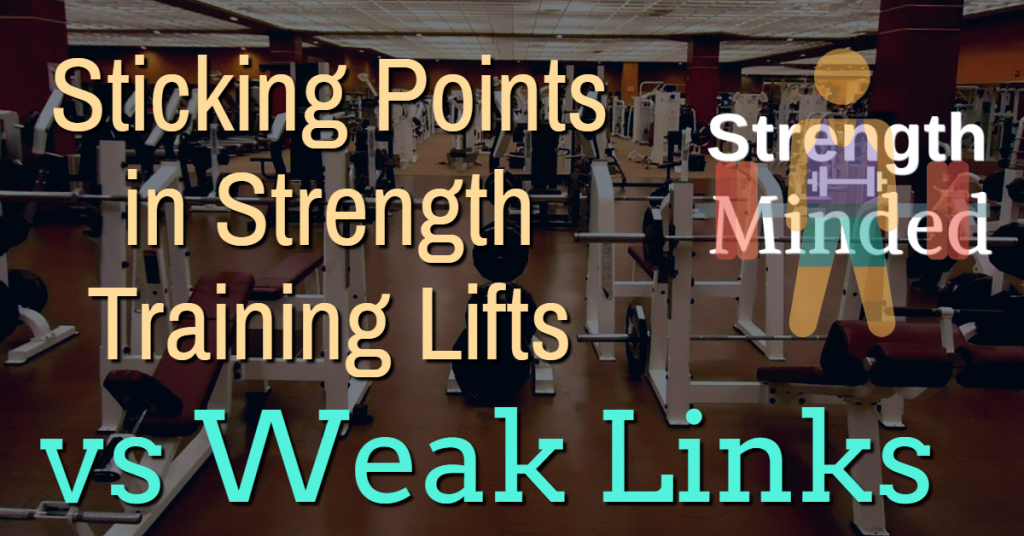 Many trainers and fitness writers choose to theorize that a sticking point is either caused by the mechanical disadvantage OR by a weak link. I think that this is likely to be imprecise and cause more confusion than good.

What these trainers miss is that a sticking point can occur even at a region where the torque is at a very high capability in the strength curve. You can be at your strongest at this point in the lift but if the magnitude of resistance is greater it is a simple question of mathematics. Clearly though, hammering away at “strengthening” a weak link which is actually not weak at all may not always be the answer. Hence, there is often an emphasis on acceleration and explosion, which can only take you so far, but makes more sense than the former strategy.

But these questions are not the same at all for lifts that are more linear such as bench press and squats. The resistance is simply the weight of the barbell. Since the movement is linear this resistance doesn’t change. The force needed to move the barbell, then, is based on its velocity. When velocity is zero a higher force input is needed to overcome the inertia and move the bar than to accelerate it or keep it moving at a constant velocity. Towards the top of the bench press, it actually takes a force input less than the weight of the bar to lockout, assuming that the bar is kept moving throughout. Kinda neat, don’t you think?

Keep in mind that linear doesn’t always mean straight. It simply means that the bar travels in a line. That line can be rectilinear (most of the time, FYI, when we mean rectilinear we say linear for short). But the movement of different body segments is always rotational. So it is the mechanical advantage at all the different joint angles that give rise to a sticking point.

Weak links can be many different things and unlike sticking points, they change and evolve over time and as a result, it is quite possible to fail at different points of a lift. Although it seems that the most common sticking point of the bench press is somewhere around midpoint many lifters may fail right after liftoff. So they surmise this is a sticking point.

Weak links are based on any number of performance or technical deficiencies. Mobility problems, stability problems, technique problems, lack of conditioning or anaerobic endurance, muscular strength, old injuries, lack of proper sleep and recovery, bad diet…the list goes on. All these things are part of the “performance chain”.

An example would be a deadlifter whose body type gave him a sticking point in the region just before the knees (which is somewhere around the most common SP for conventional deadlifts). But this lifter is having trouble locking out his deadlifts because of lazy glutes. He can’t get the hip thrust he needs and tends to finish with hyperextension of the lumbar. There are a host of deficiencies that come with it but his “weak point” is the lockout. His “sticking point,” when healthy and functional is just below the knees.

If you are like me you may not always fail at the same exact point. But the way many trainers simply equate the sticking point with failure will have you considering a new “sticking point” every time you turn around!

Many times this distinction will prove to be semantic. It simply will not matter what you call it you just need to know how to get past it. But keeping this difference in the back of your mind can help you understand the right approach to take with different points of failure on a lift, as opposed to its sticking point. For instance, when I bench press, my shoulders and triceps take over, with very little contribution from my pectorals. For some lifters, the pecs are much more active, which also explains why some lifters can get their pecs to grow from regular bench press and some cannot. The question for me, then, becomes what I should view as a weak link. I’ve gotten very good results from hammering away at my triceps, for example, to bring up my bench press and pressing in general. But, I’ve also realized good results from doing both wide grip barbell bench and very close dumbbell bench press which engages my chest more. This seems to coincide also with an improvement in my regular flat bench press. The former strategy has me hammering away at a strong muscle to make it stronger, while the latter has me working on an actual weak link. However, working on my ‘chest,’ even if it is a weak link, has much more risk than working on my triceps. Knowing all this allows me to make a risk-benefit analysis and plan my approach given my state of health at any given time Not that I am really all that into bench pressing.

Many times as well what seems to be a weak link can turn out to be weak technique. So never overlook the importance of a perfect setup and continued work on technique.