You are here: Home / Bodybuilding / You Can’t Isolate a Muscle, But Does it Matter?

A favorite phrase of well-informed personal trainers, when asked how to isolate a certain muscle, is “you can’t isolate a muscle.”

Technically, it is true. Muscles never truly work in isolation. For instance, even during an exercise like preacher curls, which seems like it completely isolates the biceps, there are other muscles at work. The primary movement in any biceps curl is elbow flexion. Although you may focus on the biceps brachii, there are two other muscles at work with the biceps to flex the elbow, the brachialis and brachioradialis. In fact, some folks may inform you that the brachialis is the prime mover and not the biceps since the brachialis is the only one which is a pure elbow flexor.

Then, there is the antagonist, the triceps, the muscle opposite the biceps that must either relax or contract, to allow the movement or to put on the brakes. Then there are neutralizers, and fixators, all of which help to control unwanted movement such as to fix the scapula. Funnily enough, the muscles active during elbow flexion that are not directly involved in the movement are involved in, more or less, ‘isolating the joint.’ In other words, if all you want to do is bend your elbow without moving your shoulder, there are muscles at work to see that this happens. So, even during the preacher curl, you cannot isolate a muscle, but you can, more or less, isolate the joint. You can read all about these different muscle roles, like agonist, antagonist, neutralizers, and fixators, in my comprehensive article.

What is an Isolation Exercise? An isolation exercise is a resistance exercise that isolates, or attempts to isolate, one muscle or muscle group and involves the action of only one joint. Typical examples are biceps curls, triceps curls, leg extensions, leg curls, and shoulder raises. It is impossible for one muscle to work in total isolation, as stated. For instance, even during the biceps curl the scapula must be stabilized and the shoulder joint fixed, which requires the work of other “fixator” muscles. However, an isolation refers to one joint undergoing active movement in one direction, as opposed to a compound exercise or multi-joint exercise.

So you can’t isolate a muscle, although you can isolate a joint movement. The question you might want to ask is so what? Unlike many other trainers, I think it is a fair question! Often we get hit with facts out of context and the facts become a justification for training practices. Yet, we are left scratching our heads when the pieces don’t seem to line up.

I searched around for “can’t isolate a muscle” and found a typical stance on a website called sportandme by a fellow named Michael Geary. His article is called Dangers of Trying to Isolate a Muscle in Strength Training. The subheading actually indicates that the article is about body part isolation versus complex movements, again, leaving us scratching our heads. Are we talking about muscles or body parts? Not the same thing, yet, like many others, the author treats them as if they are synonymous. 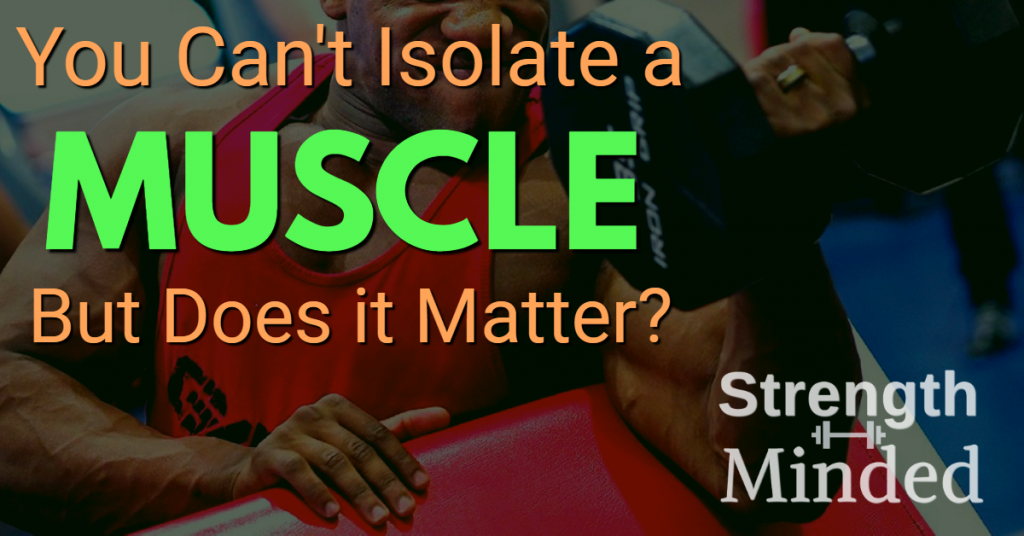 When asked how you can isolate the muscle, this author claims that he replies, “Why in the world would you want to isolate it?”

I’m not sure what rock this particular trainer has been hiding under, but we all know why we want to isolate a muscle. To make it grow. Silly questions aside, what are the dangers of isolating a muscle? According to the article, “when you attempt to isolate muscles by performing single-joint exercises, you are actually creating a body that is non-functional and will be more prone to injury.”

The idea is that since your body works via a ‘kinetic chain‘ and as a functional unit, if you try to isolate muscle or joints, you are working against your body and creating a nonfunctional body, preventing it from working well as a unit. Another claim is that single-joint isolation exercises promote muscle imbalances.

This is the kind of slippery slope thinking that pervades the industry. First, doing single joint exercises and compound exercises is not mutually exclusive. Most everybody does a combination of both, even those who are not particularly interested in great strength or huge muscles. Second, while it is true that protracted high volume single-joint work can lead to overuse injuries, to claim that doing only complex movements somehow magically protects you from ever getting injured (as the author does), is absurd.

Even if we could predict injury due to muscle imbalance, which we actually cannot, it is not difficult to do lots of single-joint exercises and also use compound lifts in a way that prevents muscle imbalance. In fact, it’s not even something you need to actively think about if you do a variety of both. Likewise, to pretend anybody who does single-joint work will end up walking around hobbled and wrapped up like a mummy due to chronic joint injuries is pure poppycock.

Yet, this kind of thinking is typical. Many a trainer, when they can’t come up with a good reason not to do something, play the potential injury card. It’s always the same: Doing that will cause injury and doing this will prevent it. Similar is the idea that using perfect form will prevent you from ever getting hurt. I sometimes get the feeling that many personal trainers gave up on their first choice of being the corner apocalypse sign guy. You’re doomed!

What is a Compound Exercise? A compound exercise is a multi-joint resistance exercise that involves a large number of muscles (and generally the largest muscle groups like thighs, back or chest) and which enables you to lift the heaviest weights. Compound Exercises are typically performed with free weights or bodyweight (with or without added resistance). Examples are squats, bench presses, deadlifts, and pull-ups. Compound exercises are also called basic exercises. If you do not like terms compound exercise and isolation exercise, you can refer to them as multi-joint exercises and single-joint exercises, respectively.

Should I Isolate Muscle Groups?

But, let’s get beyond all this and ask, once again, so what? If you can’t isolate a muscle, is this a good reason to never do a single-joint exercise?

No. The exercises and parameters you choose should fit the goal. And, regardless of what some fantasy-land trainers may tell you, if you want your upper arms to grow as big as possible, you’ll need to do plenty of both elbow flexion and extension. In other words, you’ll need to do biceps curls and triceps extensions, with a good bit of volume, and perhaps frequency. The goal is to emphasize the muscle, whether or not you can truly isolate it. You cannot easily overload the biceps by doing pullups and lat pulldowns, another fantasy cooked up by armchair trainers.

It doesn’t matter whether you can truly isolate a muscle as far as muscle building goals are concerned. When your goal is to grow a muscle as large as possible, then whether or not it is truly isolated becomes academic. The problem with trying to get any one muscle group as large as possible through complex exercises is that some other muscle becomes a limiter. Yes, your elbow flexors are somewhat active during the forementioned pullups and lat pulldowns. But you’ll still have plenty of elbow flexion juice left even after you’ve reached failure on pullups. Despite the difficulty in exhausting your biceps during a pullup or pulldown, many will insist that this is all you need to get huge upper arms! It’s pretty much an impossible dream.

There are those, as well, who will insist that you can get hulking traps by only doing deadlifts, so you never need to do shrugs or any other kind of dedicated trapezius exercise (which mostly involves some kind of shrugging movement). Folks, nobody with huge traps gets them from deadlifts only, unless they are some kind of trap growing freak. People lie about this.

People also lie about how many biceps curls they do, and all sorts of other bodybuilding type exercises. Why? Because it is part of the culture. While any real bodybuilder will tell you the truth about what it took to get huge, for others, there is a stigma. The time-honored, and effective, bodybuilding training method called the body-part split is often called the “bro split” by those in the fitness industry who celebrate the results but look down on the practices needed to get there. You can read more about the ideas and attitudes that helped lead to this in strength training versus bodybuilding.

To conclude, you can’t isolate a muscle, but if your goal is to make any particular muscle groups grow as large as possible, it doesn’t matter whether or not a muscle is truly isolated. What matters is the stimulus you apply to it. While you can grow larger muscles with only compound multi-joint exercises, if you never do plenty of volume on single-joint exercises, they will never get as big as possible for you. I know that “plenty of volume” sounds quite vague, but I cannot prescribe how much volume should be used by any one person. Your needs will change depending on other exercises you do and the frequency with which you work the muscle. I will tell you, though, that the volume you need to use for pure muscle gaining is much higher than the fitness industry generally promotes today.