You are here: Home / Strength Training / Incline vs Flat Bench: Which is Harder?

This question, which I’m sure most bench press warriors have wondered about from time to time, is one of simple kinesiology and muscle recruitment. Although most people think of the bench press as a chest exercise, the movement is really a shoulder movement and the muscles involved are shoulder muscles. Yes, your pecs (pectoralis major) are shoulder muscles. As you move the weight upwards in the bench press, the triceps must extend the elbow, yet we can assume that the act of extending the elbow is pretty much the same in the flat and incline bench. So, something must change at the shoulder.

To figure out what is going on, the first thing to do is figure out what primary shoulder movements are taking place. Some of this depends on your technique and arm position when doing the bench press. Let’s assume there are three positions in which you can place your arms: elbows out like a bodybuilder (and some powerlifters), elbows pinned to your sides, like a goofball, and elbows out around 45 degrees or so. Here, we’ll consider only arms out and arms at 45, as that is all we need to answer the question. Hardly anybody bench presses with their arms pinned to their torso, as it is uncomfortable to most of us. 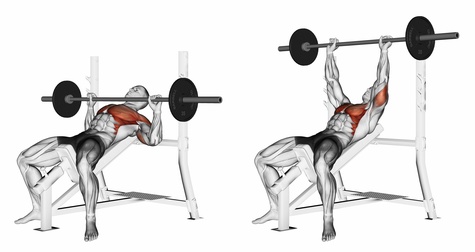 If you have a “bodybuilder style” press, with a wider grip and the elbows flared outwards, the primary shoulder movement becomes horizontal adduction. Horizontal adduction is a movement of the humerus toward the midline of the body from a position of abduction (like a dumbbell fly). Of course, you could also introduce more flexion by not allowing the bar to go up in a straight line, but let us assume you lift the bar in a more or less fixed path. Now, the pectoralis major has two heads and therefore two “sets of fibers.” The sternal head (lower fibers) and the clavicular head (upper fibers). Both parts are big-time horizontal adductors and so can produce a good amount of force during the “elbows out” bench press, which explains why bodybuilders do it, and during the chest fly, which is all about horizontal adduction. The anterior (front) deltoid is also, of course, a horizontal adductor. The elbows out style, as you may have heard, puts a lot of stress on the shoulder joint (some people talk about “middle fibers” but let’s not over-complicate things). Be aware that some of the stress on the shoulder can be ameliorated by not lowering the bar all the way.

What is Abduction? Abduction is moving a limb away from the midline of the body. Abduction can occur at the wrists, shoulders, and hips. An example is moving an arm from the side of the body to shoulder height. The root word duct/o means “to lead or carry”. The word is formed from the prefix ab-, meaning ‘away from’ and the suffix -ion, denoting an action or condition.

See also: Bench Press: Elbows In or Out?

Incline Bench With Elbows Out

During the flat bench press with the elbows out, you have all the fibers of the pecs and the anterior deltoids working to produce this horizontal adduction of the humerus. But what happens when you place the body on an incline, with your head higher than your torso? Well, instead of doing mostly horizontal adduction you do a combo of horizontal adduction and flexion (moving the humerus straight up in front of you). While the clavicular head (upper part) of the pectoralis major is active in shoulder flexion, acting to flex, horizontally adduct and medially rotate the joint, the lower sternal head does not have the exact same roles. Instead, it is more of an oblique adductor.

Okay, what the heck is the difference between horizontal adduction and oblique adduction? Think of horizontal adduction as moving your arm across your chest toward your opposite shoulder. Oblique adduction, on the other hand, is moving your arm across your body toward the opposite HIP. The reasons the lower fibers of the pecs act this way is because of the way they are attached to the humerus and their orientation. While the upper fibers are attached more to the front of the humerus the lower fibers are attached a little more to the rear of the bone. Plus, they attach a bit higher up. This makes them poor flexors and changes the way they act in adduction. As your arm is flexed in front of your body during the incline press, the sternal head starts to drop out of the picture, leaving you with only the anterior deltoids and upper fibers of the pecs. So essentially, the incline press leaves you with less muscle to work with and you have to rely more on your comparatively small anterior deltoids as you increase the incline.

The Upper Pecs are Not Recruited MORE in Incline Bench Press

Ah, but does this explain how the incline press builds the upper pecs more? Not really, you see, while the entire pectoral is maximally recruited during a flat bench press, during an incline press the lower pecs contribute less force, but this doesn’t mean the upper pecs are recruited more, it simply means the entire muscle complex is at a disadvantage. The debate as to whether you can isolate and “build” the upper chest or lower chest may never be resolved, but simple observation seems to say that such isolation is folly. The pectoral fibers work together and, despite the slight differences that can explain the different lifting capacities during the flat and incline bench, their overall action is one of adduction and medial rotation. Medial rotation, by the way, is another way of saying internal rotation.